Since 2010, we’ve been a part of one of the more unique games not just in hockey, but in all of sports — the NHL Winter Classic. Making Winter Classic trading cards for fans who brave the elements and attend the outdoor Fan Fest, on New Year’s Day no less, has been a decade long tradition. 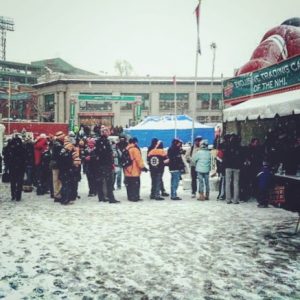 At our first Winter Classic back in 2010 in Boston, we got a sense of how hardcore hockey fans were when our line extended well outside the tent, into the snow, and no one cared one bit (as seen in the grainy, 2010 cell phone photo on the right). They gladly stood in line for 30+ minutes in 20 degree snowy weather to get their own custom trading card created. This scene would be repeated year after year, regardless of the temperatures or weather conditions.

One of the challenges of working an event like the Winter Classic is, well, the winter aspect of it. Operating sensitive photography equipment in freezing temperatures for hours on end has always been a hurdle — not just for the technology involved, but for the humans operating it as well. Our cameras, printers, and computers have always worked flawlessly without freezing, however the fingers, toes, and faces of our staff — that’s another story.

Whether it was our first one at Fenway Park in Boston, to the 100,000+ fans that packed into the Big House at the University of Michigan, to the 2020 edition at the Cotton Bowl in the hockey mecca of Dallas(?), the Winter Classic has always been a unique way to usher in the New Year. You wouldn’t think that fans would be at the gate and wanting to take a photo at 9am on New Year’s Day (and then continue to stand outside in the elements for hours before sitting outside in the elements to watch the game) — but they are. And lots of them. 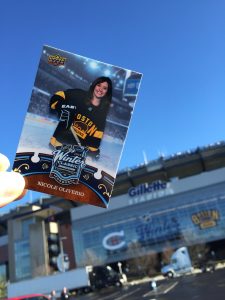 At these events, due to the popularity of the Winter Classic trading cards, we typically are the entire activation for our client Upper Deck. Most brands at the event use the entire footprint of their tents for promotions and showcases, but ours has evolved into a tent that is 25% our photo stations, and 75% the line. This has become the norm, primarily because our trading cards consistently draw the biggest crowds at the entire Fan Fest — even longer than the beer line.

Our ability as designers gets to shine as well, with the client allowing us to design the card every year, playing off the motif of the logo or location to make each card unique. You’d be surprised how many hockey fans attend each and every Winter Classic, so it’s up to us to make each card different to spice up their collection.

Who knows what the next decade of Winter Classics will hold for us, as well as the other outdoor hockey games we’ve worked at like the Stadium Series and Heritage Classics, but it’s been a memorable decade in the books. Not only that, but it’s been thousands of custom Winter Classic trading cards in the hands of some of hockey’s most dedicated fans, creating lasting memories of the one-of-a-kind sporting event they attended, which is the true highlight for us.